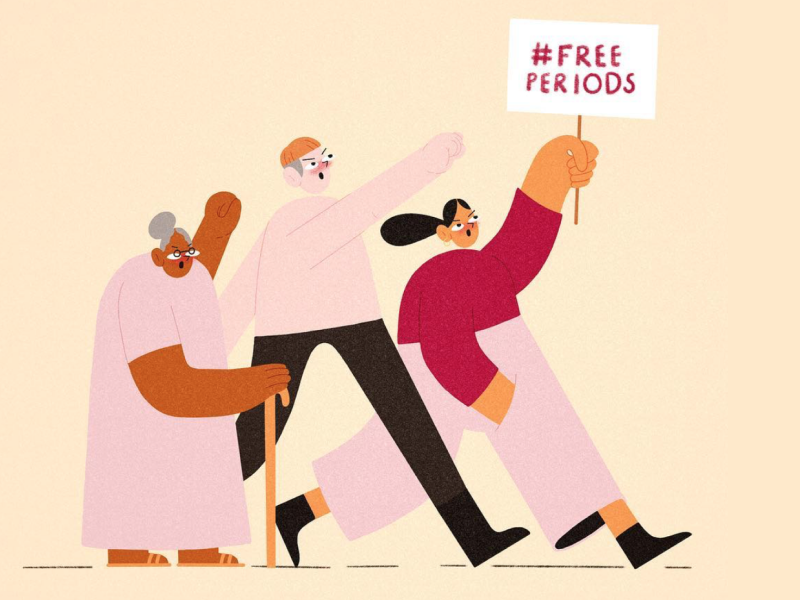 Last Friday (28 May) was World Menstrual Hygiene Day which aims to break the silence, raise awareness and change negative social norms around menstrual health and hygiene.

So, this week we're talking all about periods! We've covered the latest win for the free period products movement in Surrey, an Oscar winning documentary short film about a period revolution and Shuari Naidoo's menstrual cup company.

Of course we've also included a round up of non-period related news too. Like the Australian teenagers who just won big on climate change, Simone Biles solidifying her status as the GOAT, and the next generation of leaders making change.

In what has been hailed as a milestone moment for people who menstruate, Surrey has become the first council in England to provide free period products.

Teaming up with period charity Binti International, Surrey County Council will be providing free pads from public buildings and offices in the area. Binti International aims to ensure access to period products and to help dismantle period stigma.

Research by charity Plan International recently found that three in 10 girls in the UK have struggled to afford or access period products during the pandemic.

"We have to be brave enough to challenge the reason behind the shame that leads to so many women and girls suffering in silence." says Manjit K Gill, founder of Binti International.

This news comes off the back of Amika George's successful campaign to get the government to fund free period products in every school across England.

The Federal Court of Australia has found the environment minister has a duty of care to protect young people from the climate crisis.

Led by 16-year-old Anj Sharma, a group of eight teenagers teamed up with an 86-year-old nun (Sister Brigid Arthur) to launch a case to prevent the approval of a massive coal mine.

The judgement in the Federal Court is understood to be the first time a court has ordered a government to specifically protect people from the harm of climate change. Teenagers: One, Government: Nil.

You Need To Watch

Directed by Rayka Zehtabchi, the documentary-film follows women in rural India - where the stigma of menstruation persists - who make low-cost sanitary pads on a new machine and stride toward financial independence.

Bonus Reco: You Need To Read

Because who doesn't love a bonus reco?!

Make It Happen: How To Be An Activist by Amika George.

The 21-year-old founder of Free Periods (yes, the same woman who campaigned for free period products across schools in England) breaks down how you can be an activist and make history - from anywhere in the world.

Shuari Naidoo Is Here To End Period Poverty, Save The Planet And Address The Stigma Of Periods In Society

Some fun facts about Naidoo: she loves helping others and spreading awareness around women's health, intersectional feminism, and human rights. Her go-to coffee is a mocha with coconut milk - "the chocolate syrup and coconut milk intensifies that indulgent morning coffee!"

Established in 2019 through the Young Enterprise Scheme, Moraka Menstrual Cups’ mission is to make periods cost-effective and sustainable. Fun fact: menstrual cups last around ten years and are estimated to save people up to $5000 in disposable sanitary products over that time.

Moraka Menstrual Cups are also affordable - they're priced at $20 (NZD) compared to the average cost for a menstrual cup of $30 to $90.

Naidoo currently operates Moraka Menstrual Cups in New Zealand and supplies cups to NGOs like Endo Warriors Aotearoa and The Period Place. But she has big plans for the future.

Amina Mohammed started her career in the private sector working with architects and engineers. She's now the Deputy Secretary-General of the United Nations

Mohammed started her career working on the design of health, education and public sector buildings.

She then moved into the public sector, rising to the position of adviser to four successive Presidents in Nigeria on poverty, public sector reform, and sustainable development.

In this role, she steered the country’s efforts on climate action, protecting the natural environment and conserving resources for sustainable development.

Sustainability has been a common thread throughout Mohammed's career, along with gender equality

She's served on numerous international advisory boards and panels, including the Global Development Program of the Bill and Melinda Gates Foundation, the African Women’s Millennium Initiative and Girl Effect.

Mohammed also coordinated the Task Force on Gender and Education for the UN Millennium Project from 2002-2005.

“I am obsessed with becoming a woman comfortable in her skin.”