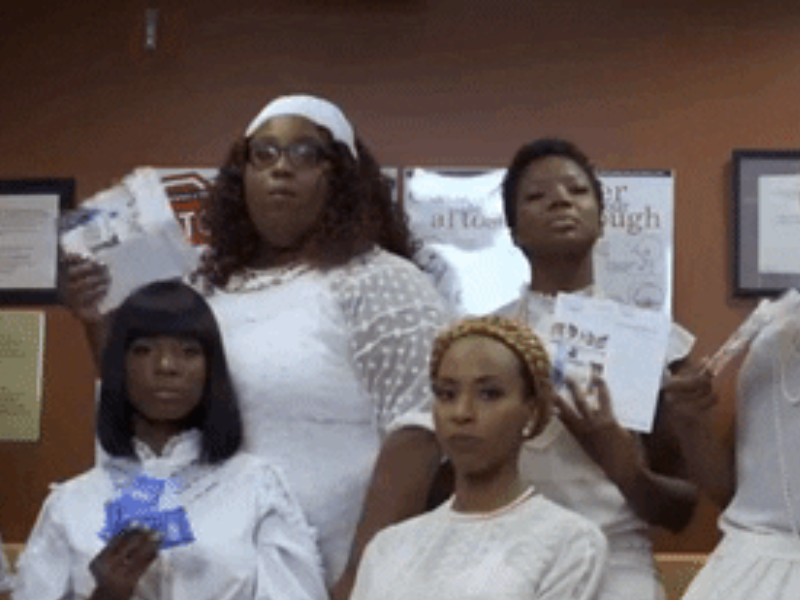 Who is she? Disappearing for a while and suddenly popping back into your inbox as if nothing happened?! It’s been a while. But I’m back! Long story short, I packed up my life in Australia and will be living in the UK/Europe for a little while. I’m in London as we speak!

Picking up where we left off and getting right back into highlighting the stories and achievements of BIPOC women. But also talking about what’s happening in America (WTF?!).

Meanwhile, I had the pleasure of chatting with Zai Sylla for this week’s trailblazing woman feature. She’s your go-to person for Black leads film and book recommendations.

So, let's get glowing

P.S. I was honoured to attend a Diet Paratha speaker series event this week feat. Charithra Chandran (she plays Edwina Sharma in Bridgerton Season Two, duh!) Charithra shared her experience as a Tamil woman breaking into mainstream TV, and the importance of uplifting those in your community. My fave quote of the night (and caught on camera, obvs): “When one of us wins, all of us win.” Also, I am ✨manifesting✨ an interview with Charithra in a future edition of Glowreel 👀

BIPOC Woman News Round Up!

Human Rights:
Seriously SCOTUS, lay off our bodies 😡 Y’all know that the Supreme Court of the US overturned Roe vs Wade. Access to abortion is already banned, or about to be severely restricted or banned, for millions of women and people who can get pregnant in the US. And, we know that the people who will be impacted the most by this decision are from the most marginalised groups (including people of colour). It’s a shit situation. Access to healthcare shouldn’t even be up for debate.

If you’re wanting to help out - whether you’re in the US or not:

Health and Wellness:
Shavasana and breathe a sigh of relief 🧘🏾‍♀️Women of colour are fighting backagainst racism and a lack of diversity in the UK’s yoga industry. Yep, despite yoga originating in India, there are reports of some white students walking out of classes when they see a black or brown teacher 😲. A 2020 survey and report about yoga practice in the UK found that 87% of practitioners who responded were women, and 91% were white. Let’s see if we can add a little bit of spice to the yoga industry…

No more girl-bossing, just soft-living 🌸 The #softlife trend is on the rise across social media. Analysis by Zee Feed highlights that people of colour, and mainly Black women, are leading the charge on the soft life trend. What is the soft life exactly? According to Urania (a YouTuber), it’s “…a life of ease and comfort. It’s a lifestyle where you let go of constant pressure, overwhelm and the hustle and bustle.” Bring on the soft life!

Politics:
The first, but not the last 👩🏿‍💼 🧕🏼 ICYMI, Francia Marquez recently became Colombia’s first Black Vice President. Over in Australia - Fatima Payman is the first Afghan-Australian woman, and the first hijab wearing Muslim woman, in Parliament. She’s also the youngest serving Senator in Parliament and the third youngest in Senate history. You go girl 👏🏾

Rihanna:
Shine bright like a Billionaire?! 💰 Riri is officially America’s youngest self-made billionaire woman. Obviously we’re happy for her, but we're even happier about her money mindset. “My money is not for me; it’s always the thought that I can help someone else.”

It’s NAIDOC week in Australia (NAIDOC = National Aboriginal and Islanders Day Observance Committee). This year’s them is Get Up! Stand Up! Show Up! Because we need to keep rallying for meaningful change for Aborignal and Torres Strait Islander communities - not just during NAIDOC week, but always.

You Need To Watch: Invisible Seams

Directed by Jia Li, Invisible Seams celebrates the lives of eight different Asian seamstresses and pattern-makers in New York, painting an intimate portrait of their diverse backgrounds, how they interconnect and weave the fabric of the New York Fashion industry.

Zai Sylla is your go-to person for Black leads film and book recommendations (oh, and she’s an actress too!).

We caught up with Zai to hear more about her journey and her upcoming initiative: Conversation Circles. Highlight’s from Zai’s interview include a full circle moment involving her late dad, and being invited to the TikTok Black Creator Trailblazers Program.

We’ve shared some snippets from Zai’s interview below, and the full interview is live on the website. Ready to find out more? Let’s go!

What motivated or inspired you to share recommendations for Black lead films and books?

I was educated and raised in a predominantly white environment so most of the people that I knew growing up were white. There were five Black kids at my school. The reference for me was mainly white people. I was raised in an environment where I didn’t really know how to spot racism. I wasn’t even really familiar with it because my mom preferred to pretend like racism didn’t exist rather than educate me on it.

Fast forward to June 2020, it was the peak of the BLM movement, lockdowns and the pandemic. I had a bit of a crisis because I was looking at African-American people going through police brutality and I was just like “that’s not my Black experience” and I was so confused about what was happening. In a way I was trying to stand my ground and find my place and my identity as a Black woman because it’s something that I never did. It was my first time wanting to step into my identity as a Black woman and really assert myself.

What do you want to achieve through your platform and recommendations?

The goal with my platform is to guide people towards films and books that can teach them about anti-racism and normalise having Black people on the big screen and in books.

Long-term, I want to be the go-to platform for people to learn about Black stories. And I want to be able to promote and increase visibility of these Black stories. I’m really eager to help people learn antiracism through films and books, and to help the Black community to have their stories elevated and supported in the way that they deserve.

What challenges have you faced in building your platform?

The biggest challenge has been when I find myself comparing myself to other creators and their growth. I really want to get to 1 million followers! [editor's note: we have no doubt that Zai will get to 1 million followers!] I’m really hungry for my work, my recommendations, to reach more people. But comparison is the thief of joy. I have to remind myself that my journey is no-one else’s journey, I will get to where I need to be. I just need to trust the process and keep doing my thing.

What have been the highlights along the way?

2021 was a tough year for me, especially because in April 2020 my father died. While that’s obviously not a highlight, his passing sparked one of the biggest projects that I’m involved in - Conversation Circles. In fact, everything that my father taught me is the foundation of what I do now.

My dad was white and growing up he was the one who taught and encouraged me to really embrace my black features. He was the one who showed me all of the Black leads films that I first recommended on Tik Tok. He’d always push me and my siblings to think about what I have learned from watching a film. He taught me to not be afraid of having critical conversations, to have a critical mindset and a taste of effort - so to always go above and beyond.

I recently became part of the Tik Tok Black Trailblazers program, which has also been a huge highlight. They gave us the opportunity to pitch a passion project - one that can get funded. And that’s how Conversation Circles came to be, and it’s been one of my main highlights.

Can you share a bit more about Conversation Circles?

I realised that with the books and films I’m recommending, we need to sit down together and discuss them, like I used to do with my dad.

For Conversation Circles we’ll have a film screening, for example, and afterwards we have a safe space for any individual to express their thoughts on the film and how it relates to their anti-racism journey. Whether they’re there as a Black person, or a person of colour in general, or an ally. We have a lot of great initiatives here in London, but we’ve never really had a dedicated safe space to have those important and hard conversations. With books, I’d like to have the author there to do a Q and A, and have a group conversation all together.

Conversations Circles will be launching in October, during Black History Month in the UK, so subscribe to the newsletter for updates!

I’m also creating a membership for everyone to find black films and books easily, monthly online black book club and black film club, how to identify positive representation of black people and so much more. This is launching very soon and you’ll be able to get advance tickets for Conversation Circles.

What’s your advice for BIPOC women who are wanting to blaze their own trail?

I would say that one of the most important things is authenticity. Stay true to yourself and to what you really want to do.

“To fly, we have to have resistance.”