One of the best nuggets of advice I've ever received 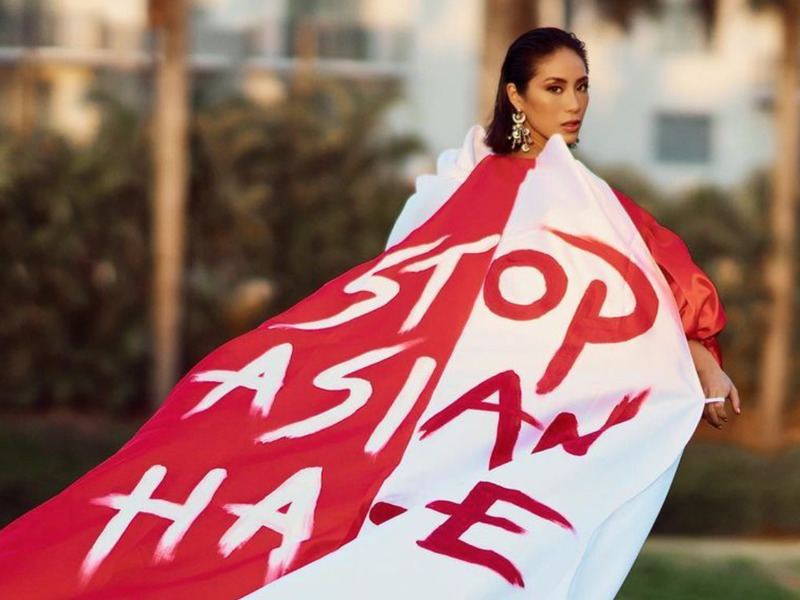 One of the best nuggets of advice I've ever received was simply to "lean in".

I was struggling with a piece of work. My boss encouraged me to lean in to the discomfort I was feeling, to see if that helped me work through the challenge I was facing.

It did - by finding comfort in my discomfort I was able to get through that piece of work.

Why I am I rambling on about this? Because I've since learnt that "leaning in" applies to different contexts. In the wise words of Saweetie, it's all about Tapping In to the things you care about.

Whether it's Miss Singapore leaning into her platform to send a clear message about stopping Asian Hate, the founders of Droplet leaning into their heritage to create a delicious healthy drink, or Wangari Maathai leaning into local issues to make global change.

So, lean in, and let's get glowing!

Her costume was inspired by the Singapore National Flag.

In describing her costume, Ong said "The red represents equality for all. White symbolises everlasting virtue. Singapore is a place for all races and they are very proud to be Asian. It sure would be great, to #StopAsianHate."

In a similar vein, Miss Myanmar - Thuzar Wint Lwin raised a banner towards the end of her walk that read "Pray for Myanmar." Her aim? Calling attention to Myanmar’s pro-democracy movement and to appeal for international help in freeing elected leaders who have been detained.

We love that both women used their platform to send a clear message against prejudice and violence.

These eight artists shared their thoughts.

For rapper Saweetie, it's all about taking pride in who she is and celebrating the rich history and culture that her ancestors created.

Meanwhile for the sibling duo Lastlings AAPI Heritage Month is "a time to reflect and celebrate your culture and heritage. Celebrate our AAPI friends and families achievements.”

Journalist Simran Sethi has also shared her complicated relationship with AAPI Heritage Month. She points out that "we're far from monolithic".

At the same time Sethi appreciates that AAPI Heritage Month allows us to "connect to each other in a way that we maybe couldn't even do in our home place."

You Need To Read…

In honour of AAPI Heritage Month, we've rounded up our top five books by Asian American and Pacific Islander women authors. Get yourself ready for a whole bunch of binge reading:

Helping You Find Balance, One Droplet At A Time

Celeste Perez is busy woman, and has always had lot of projects on the go. But a few years ago, a stress-induced medical scare helped her realise she needed to find better balance in her life.

She started using adaptogens (herbs and roots considered a form of herbal medicine) to manage her stress and noticed a positive difference in her stress levels and overall health. Perez wanted to shared her secret ingredients for a more balanced life with the world but there was one catch: adaptogens aren't always the tastiest.

So she teamed up with Adrienne Borlongan, food scientist and founder of Wanderlust Creamery, to whip up some delicious adaptogen flavours. While working on their concoctions, both women leaned into their Filipino heritage, where food is medicine.

The end result? Droplet! adaptogen-spiked sparkling drinks with different flavours targeted for specific functions, like an immunity booster and a mood balancer for when you feel overwhelmed. Delicious and good for you, and a female founded brand - what a winning combo!

Wangari Maathai was the first African woman to win the Nobel Peace Prize in 2004. This was one of her many firsts in a legacy of impressive achievements

Maathai also played an active part in the struggle for democracy in Kenya.

She established the Green Belt Movement in 1977. The revolutionary movement, centred around sustainability and women's rights, was well ahead of its time

The indigenous, grassroots NGO takes a holistic approach to development by focusing on environmental conservation, community development and capacity building.

Maathai was determined to fight the vicious cycle of environmental degradation and poverty. She understood that families struggling to meet their own needs often have to strip their own environment for resources, but when those resources disappear, families have an even harder time making a living—and even fewer chances to create a better future.

Maathai worked to ensure that her efforts to conserve land also led to employment and empowerment among the most vulnerable people, especially women.

Maathai's legacy lives on today, and her work continues to make the world a better place

Since being established the Green Belt Movement has planted over over 51 million trees!

Meanwhile, over 30,000 women have been trained in forestry, food processing, bee-keeping, and other trades that help them earn income while preserving their lands and resources.

The Movement's headquarters remain in Nairobi, Kenya and it has branches across 30 countries.

In the words of the Nobel Committee. Maathai was a woman who "thinks globally and acts locally." An incredible legacy!

“Finally I was able to see that if I had a contribution I wanted to make, I must do it, despite what others said. That I was OK the way I was. That it was all right to be strong.”