On Being Your True Self: In Conversation With Lana Patel 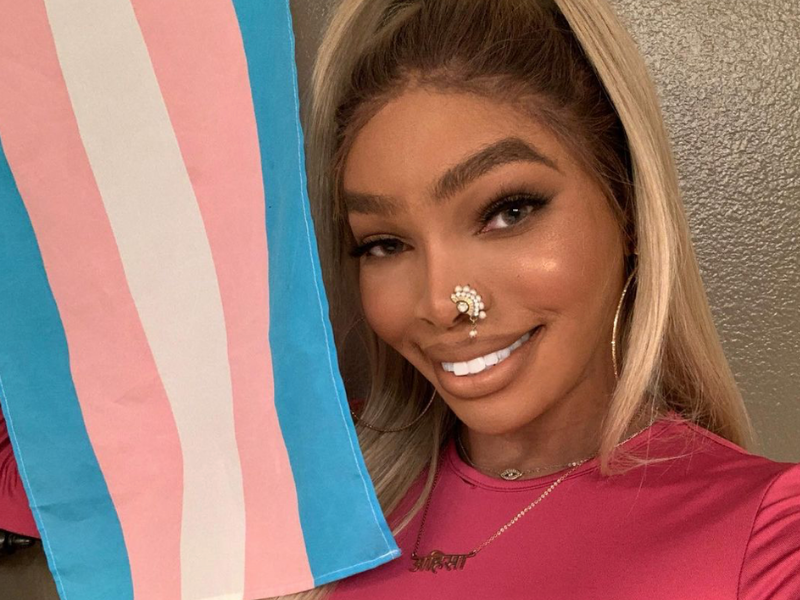 Lana Patel is a force to be reckoned with, and one of the kindest people you will ever meet! She’s a proud trans woman who uses her platform and voice to advocate for trans women and women of colour.

Lana is also a model and makeup artist for MAC (pro tip: Lana loves the MAC studio fix line, and beyond MAC, is a big fan of Live Tinted!).

We caught up with Lana to hear more about how her heritage has influenced the woman she is today, her experience transitioning to her identity and her excellent tip for loving the skin you’re in.

I’m Lana Patel. My pronouns are she/hers. I’m an Afro-Indo Caribbean trans woman and I was born and raised in Queens, New York.

My parents are what they call Dougla in the Caribbean - that’s the mixing of African and Indian ancestry. My mother is Jamaican and Indian - she’s Punjabi. And on my father’s side, his mom is Afro-Trinidadian and his father is Gujarati.

Go-to coffee order: I have a few things! If I go to Starbucks I’ll do the chai tea - not the chat tea latte though! I do the chai tea bag in a venti size, with soy milk, no water and ten raw sugars (I want it Gujarati style!). I don’t really drink coffee - if I’m ordering a coffee it’s because I need the caffeine. So I’ll get a cold brew nitro in Grande with vanilla sweet cream - I’ll put in seven pumps to make it sweet!

Has your heritage influenced your passions and interests? If so, how?

Growing up my parents wanted to make sure that I had the American dream and the American experience and that I was able to assimilate fairly easily into this country. I ended up moving in with my mother's parents when I was 13. And that was totally different because with my grandparents I had culture all the time, that's just who they were.

Who I am is a combination of the music that I used to grow up listening to, the food that I ate, the stories that I was told and dance - I come from such rich cultures and dance flows through my veins.

My heritage also shapes my social media. A lot of my posts are about Dougla - being Indo-Caribbean and Afro-Carribean - and loving and showcasing South Asian culture. A lot of people don't really see people like myself in those spaces and I want to normalize visibility, especially for Dougla people.

What was your experience transitioning to your identity? Was there a particular moment where you knew you were your true self?

I always knew who I was - as far as the early age of three I remember feeling an inconsistency between how I felt and how I was treated. So I felt like a girl, I felt like the other girls, but I was being responded to as male.

I had the ability to simulate or to pass as a female looking child until puberty hit. I had an androgynous name at birth and I looked female. It allowed me to escape a lot of the harsh realities of being male at that time.

When I was 12 I came to the realization that this is who I am. I felt compelled to come out to my teacher in an essay. Initially I identified as gay - I knew that I liked guys. I also didn’t have to deal with the transition part - I knew that was a bigger task. I knew I needed parental consent and I knew my parents wouldn’t consent. Especially because, culturally in the Caribbean, misogyny and homophobia are rampant. We can’t even get into transphobia - trans identity wasn’t even something that was thought of. So the idea of transitioning was deadly.

At 17 I decided to transition. I got to a place where I was like, it needs to happen and I'm ready. I started a social transition first and started growing my hair out. And then I started taking black market hormones, and that kind of fast tracked my transition. I did that in secret for about a year.

Then I went to New York to see my parents and my step-dad had figured me out the moment he saw me. He asked me “are you trying to get in touch with your feminine side?”. My hair was obviously longer and I looked feminine because I’d been on hormones. The truth came out .. they asked me if I could tone it down and just finish school.

I knew what hormones did to the body, and I knew I didn't want to grow as an adult male hormonally. So I told them that this is me, and I can't stop. It got to a point where they talked about me being homeless and I said I'd rather be homeless than stop my transition. Later that year my step dad said to me “I love you as my child, and I accept you as my child but I will never consider you a woman.”

Fast forward to five years later and I went to New York to visit my family. My step dad was on the phone to his mum and he said “hey, your granddaughter’s here” and he called me baby girl when he dropped me off at the train station. He came around before my mother did - it took her 18 years to come around.

It took a while but we’re good now. We’re in a really good place and I’m really happy.

I love that you use your platform and voice to uplift trans women and women of colour! What motivates you to advocate for and uplift other women? Are there particular women who inspire you?

Both of my grandmothers are my inspiration. I think they’re both such powerful women.

Janet Mock is another amazing trailblazer. I think of her plight and journey and working with Marie Claire and coming out back in 2006, which was the time I started my transition. She's been a huge icon for me.

In terms of what motivates me to advocate for and uplift other women. It’s kind of self induced in a way. I am a woman and I’m also a feminist. I don't think a society can exist without women - women are the portal to life. I can't think of a reason why one would not advocate for women

A lot of the work that I do for trans women and for trans equality is because I've seen the ways in which we've been treated in society. There's still inequality and we’re just fighting for a chance to be in the room, let alone have a seat at the table.

I think that we just need to exist freely and openly. To have opportunities and to have an equitable playing field is really important for this community.

There’s a quote from Sylvia Rivera where she says “You never completely have your rights. One person, until you have all your rights, and I feel as long as there is one gay (but I say gay, black, trans, brown, immigrant queer person) who has to walk for their rights, all of us should we walking for our rights.”

So, I’m fighting for everybody but at the forefront is trans women of colour, and women of colour. Until we’re all on the same equal playing field we need to continue to work.

You're a model, dancer, singer, makeup artist and a host for Girls Like Us. What's been the proudest or most special moment of your career to date?

My proudest moment was when I was featured in Vogue India - that was a dream of mine! I felt like Leyna Bloom - she’s a trailblazer, an icon and a beautiful trans woman. She was the first trans woman of colour to appear on the cover, and then Indya Moore was on the cover - she’s incredible! So I was like okay, I want to be in Vogue India. It means a lot more to me especially because I am a person of Indian descent.

I also got to do a Pantene commercial and that was incredible. Seeing an Afro-Indo Caribbean person in a sari celebrating Diwali on a commercial - just epic!

Recently I walked in LA Indian Fashion Week and I was the first trans woman to walk in the show - which was a dream of mine.

What's your advice for loving the skin you're in?

For me it's taking a moment to be in nature, being part of nature, being one with nature and knowing that this is all a greater design.

There’s a quote by Rupi Kaur (who I love!) where she says “It is a blessing to be the colour of earth. Do you know how often flowers confuse me for home?” I think that’s so beautiful.

When it comes to loving the skin you’re in, it’s about figuring out what brings you joy and knowing that that is the thing that will help you in times of distress or uncertainty. Figuring that out for yourself will help you to realign and remind yourself how beautiful and powerful you are. When I have that moment where my roots need watering, it’s about going outside and getting fresh air and sunshine.