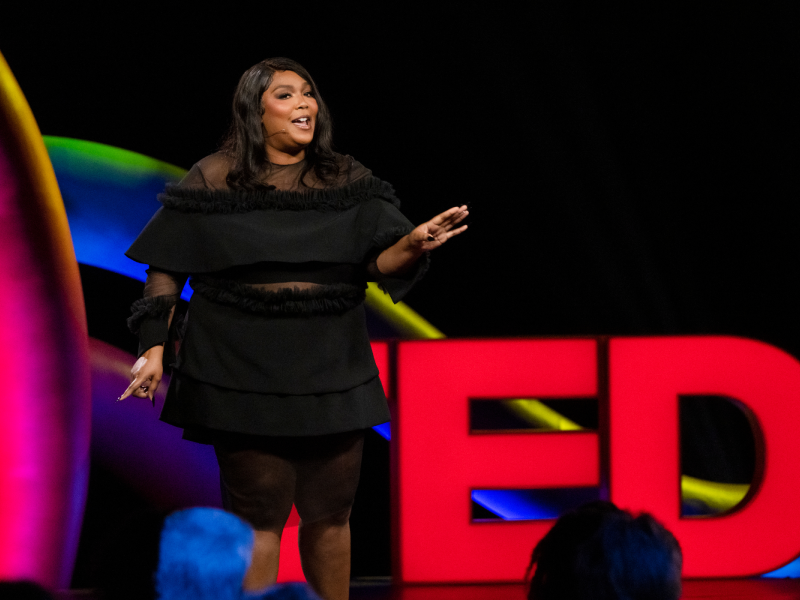 How is it October already?! Fun fact: this time last year, I was mulling over starting Glowreel and it genuinely blows my mind to think about how far we've come.

October is a month for learning, sharing and celebrating the history of Black people (in the UK) and the LGBTQIA+ community (in the US). So the timing of Lashana Lynch and Beatrice Luigi Gomez's history making moves is kind of perfect!

Yen Taylor is this week's community feature. She's an advocate for accessibility, equality & inclusivity - which is underpinned by her intersectional experience.

P.S. If you love (or just like) your weekly Glowreel newsletter, please spread the word and tell your family and friends to sign up! Welcoming new people to our newsletter community is my favourite thing to do

Black History And A TED Twerk

October is Black History Month in the UK. This years theme is 'proud to be'- to celebrate being Black or Brown and to inspire and share the pride people have in their heritage and culture.

To mark Black History Month, Black Ballad and Yahoo UK have collaborated on Black & Beautiful in Britain. The four-part video series features the experiences of Black women from different perspectives across the beauty industry.

See also: Alice Dearing on making history as the first Black woman to swim for Team Great Britain. Dearing shares her reflections on being proud of making history, but also feeling a slight sadness of the fact there are still black ‘firsts’ in 2021. A reflection we can definitely relate to.

Meanwhile, Lashana Lynch just made history as the first Black woman to feature on the cover of the first-ever issue of Rolling Stone Magazine - UK Edition. The No Time to Die star shares how she channeled the micro-aggressions faced by Black women on a daily basis into her role in the film. See also: Lashana Lynch, the first female 007: ‘I never had a plan B’.

Speaking of Black history, Lizzo's TED Talk on the Black history of twerkingis officially live! In what's one of our favourite TED talks ever, Lizzo breaks down the historical and cultural significance of the traditional West African dance. And yes, she twerks on stage, and also shares how it taught her self-love

You need to listen: to the Fufu & Tibs podcast

Ok if you haven't tuned into Fufu and Tibs before, you're in for some excellent banter! Join African Aussie girls Gillean, Mary, Rebka and Vanessa as they dish out relatable content, with a side of bants.

“We Have Gold Running Through Our Veins”

Meet Yen Taylor (she/her) - a Chinese-Eurasian Aussie who currently lives in the UK. Yen is an advocate for accessibility, equality & inclusivity, particularly for people experiencing disability.

Tell us a bit about yourself

I am a creative who feels like I’m always bursting with things to express, to create & connect. I run an instagram account @yen_out_loud which is about accessibility, equality & inclusivity.

I am a queer-bisexual disabled woman of colour. I’m yellow-ish, or as my cousin and I like to say, more poetically, we have gold running through our veins.

Can you share your experience with using mobility aids?

Honestly, when I first needed mobility aids I felt SO uncomfortable. I felt like I should be strong enough to push through without using a mobility aid, like everyone was judging me and watching me.

Some of that is internalised ableism, some of it is a hangover effect of the way I had to grow up as a child, some of it is the culture I grew up in.

All cultures have their own version of ableism embedded deeply.

One thing I have discovered through using mobility aids is that accessibility in the majority of places, is still really difficult or nonexistent. I also have a lot of strangers look at me and without even saying hello, immediately say, “What happened?” I’ve had people literally yell that across the street.

What inspired you to start sharing the stories of people using mobility aids?

I thought I had no prejudice towards disability until I became disabled myself.

The shame I felt having to use mobility aids made me realise that I have absorbed so much ableism just growing up in our society.

What do you hope to achieve by sharing the stories and experiences of people using mobility aids?

I started sharing stories of people using mobility aids because I wanted to meet people like me, to feel less alone in my experiences and to normalise, visually, the fact that people of all ages use mobility aids.

The more shame we shed around mobility aids, the better for everyone so it can be seen as less of a tragedy and more a part of life.

Image via Ministry of Defence, UK

Lilian Bader one of the first black women to join the British Armed Forces. She fought hard to get there

She became an orphan at the age of nine and was placed in a convent, where she stayed until she was 20.

It was difficult for Bader to find employment, because of her heritage. "My casting out from the convent walls was delayed. I was half West Indian, and nobody, not even the priests, dare risk ridicule by employing me."

Three generations of Bader's family served in the armed forces, she followed suit in 1939

She started out her career as a canteen assistant at an army base in Yorkshire. She then trained as an instrument repairer, before becoming a Leading Aircraft Woman. She went on to earn herself the rank of Corporal.

Bader was given a compassionate discharge from her position in 1944, when she became pregnant with her first child.

She later retrained and got a degree from the University of London to become a teacher.

"People often say that "beauty is in the eye of the beholder," and I say that the most liberating thing about beauty is realizing that you are the beholder. This empowers us to find beauty in places where other have not dared to look including inside ourselves."
‍
-Salma Hayek