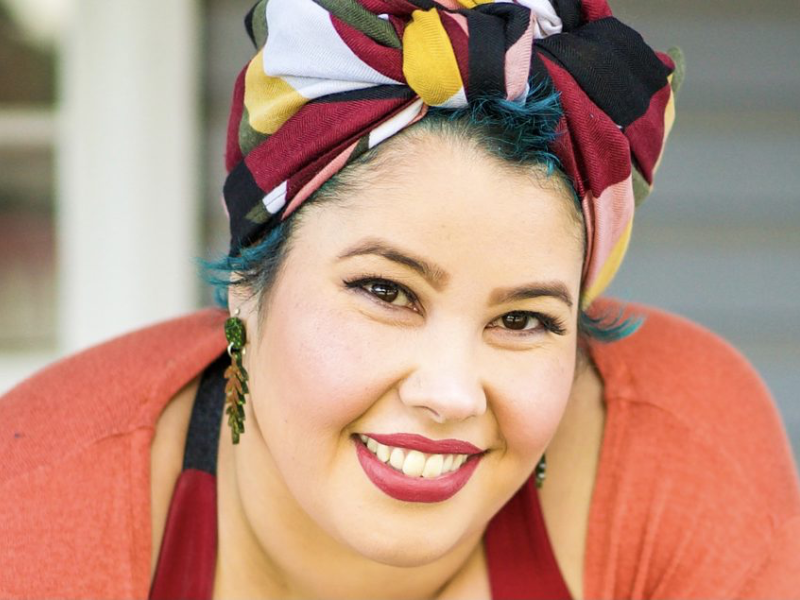 Let's be real, we're all a little tired of the lip service when it comes to the big issues. Ya know, like anything impacting BIPOC women, and climate change. This week though, we're seeing young BIPOC women rise up and fight for actual change - they are truly the future!

I also interviewed the lovely April Hélène-Horton (#itsbodzillabitch) on what motivated her to advocate for body acceptance and fat positivity. You'll want to be April's BFF after reading all about her and her incredible work. Full interview up on the Glowreel website, and the Community Feature section below features a sneak peek 👀

P.S. In this week's feel good moment - Cardi B offered to officiate Kal Penn's wedding and I really hope this goes down! I feel like she'd be the best celebrant - do you agree?

"Blah, Blah, Blah" And The Rise Of The Mumfluencer

No more blah, blah blah ... we need actual action! The UN Climate Change Conference (COP26) is underway and young people are tired of the lip service from decision makers. COP26 has been called out for a lack of representation from the global south. ICYMI this year's delegation is mainly Old. White. Men.

There's hope for the rest of us though. These women of colour activists are providing a fresh perspective on the climate crisis, and amplifying the voices of marginalised communities while they're at it. Closer to home in Australia, young people like Miracle Temareti and climate activist Varsha Yajman are fighting for tangible action to combat the climate crisis.

See also: Vanessa Nakate on fighting for climate justice for Africa and why having women and people from diverse communities at the climate change table is necessary.

On the importance of women and people from diverse communities... women of colour mumfluencers are on the rise! These WOC mums found it hard to find culturally relevant parenting advice and products. So they built their social media presence to become the mumfluencer representation they never had. We love to see it, ladies!

Speaking of representation, see also: Thu Nguyen is the first non-binary person elected to office in Massachusetts. They are also the first Southeast Asian American member of Massachusetts City Council.

You need to read: Swing Time by Zadie Smith

A story about friendship and music and stubborn roots, how we are shaped by these things and how we can survive them.

Image via What's On Media Au

April Hélène-Horton, aka The Bodzilla, is the woman that everyone wants to be BFFs with. She's so lovely and you know she'll always have your back!

In this week's interview, April shares her motivations behind The Bodzilla, a space for body acceptance and fat positivity, and her tips for loving the skin (and body) you're in!

We've shared some interview snippets below. You can catch the full interview on our website here.

I grew up in Goulburn - my mum is also from that area and my dad was Mauritian. I'm my mum's only child, and one of five on my dad's side. My brothers and sister are easily the coolest people I know.

Why April started The Bodzilla

I have always been the person who would stick up for someone or confront bad behaviour in public - I remember being at school and being teased but still willing to say ‘oi, fck off’ to the boys who hassled other fat girls. Not sure what I was hoping to achieve in that scenario other than to show the person that I didn’t think it was OK for them to be treated like that … so I guess that’s what The Bodzilla does on a bigger scale (pardon the pun!).

... I have had to come up with some pretty hard boundaries around what I will accept in the comments section - not just for me but for the people reading them.

On loving the skin (and body) you're in

Choose to say something different every time your brain tells you a nasty thing about yourself.

The full interview with April is available here. In addition to the snippets above, April shares some reflections from her (incredible) career and more thoughts on loving the skin you're in.

Maya Angelou was a Pulitzer prize-nominated poet and civil rights activist. Her first autobiography I Know Why the Caged Bird Sings received critical acclaim for its depiction of racism and sexual assault. A leader in black feminism, Angelou worked with Martin Luther King, Jr. and Malcolm X during the 1960s Civil Rights Movement.

"The path from dreams to success does exist. May you have the vision to find it, the courage to get on it and the perseverance to follow it."