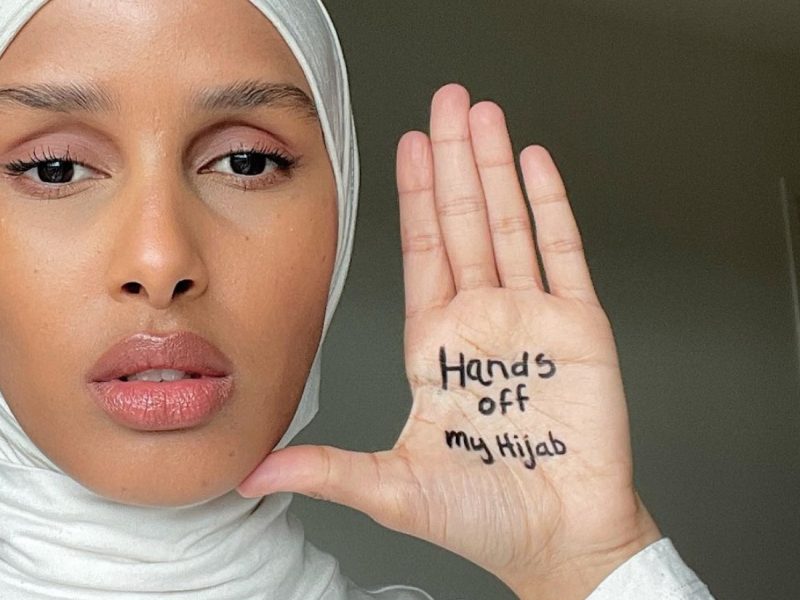 Can we take a moment to appreciate how smart kids these days are?! They can use technology better than all of us, they put anyone over the age of 25 to shame over on Tik Tok (iykyk) and some of them are inventing life changing products. You'll probably need to scroll down and read about Dasia Taylor to get this!

In addition to really smart kids, this week we're covering the #handsoffmyhijab movement, women of colour reclaiming their names and Mama Africa. You will feel the inspiration coming at you through the screen as you read this week's newsletter.

#handsoffmyhijab And The Sustainable Fashion Movement

The French Senate has voted to ban girls under 18 from wearing the hijab in public, under the “anti-separatism” bill. If the bill is passed, mothers with a hijab will also not be able to accompany their children on school trips.

Women are fighting back on the proposed ban. Lebanese author, Najwa Zebian tweeted "... Forcing a woman to wear a hijab is wrong. Just like forcing her to take it off is wrong. It’s HER choice.”

Hijabi influencers from all over the world are also leveraging their platforms to push back on the ban. Using the hashtag #handsoffmyhijab they are sharing why a ban could be harmful to hijabi women and highlight how it could lead to deeper divisions for minorities in western countries.

Women Of Colour Are Advancing The Sustainable Fashion Movement

The sustainable fashion movement has been gaining momentum the past few years. What's not to love about it? Advocating for a better fashion industry that cares for its garment workers and the planet - we are here for it!

Maggie Zhou recently covered 10 BIPOC women from around the world who are making their voices heard in the sustainability space for Fashion Journal Magazine.

The article features some incredible women like Aditi Mayer from the US who focuses on sustainability and decolonizing fashion, and Jess Molina from New Zealand, who advocates for size and racial diversity.

You'll be inspired and interrogating the contents of your wardrobe after reading this piece!

You Need Add This Jewellery To Your Collection...

OMA THE LABEL. Founded by Neumi Anekhe in 2018, OMA is focussed on challenging homogenous industry standards, while creating quality and affordable pieces.

Anekhe was driven to create OMA because she saw a need for more brands representing people of colour. She wanted to help diversify the markets and shake up the typical imagery that we see in fashion today.

Kids These Days ... They're Smarter Than Us!

Sutures are the threads used by doctors to close wounds to skin or other tissues (yes, we had to google to find out what a suture is!).

Anyway ... Taylor realised there was a gap in the suture market. In the US, sutures are covered in a conductive material that senses the status of a wound and can pick up any changes (e.g. an infection). The sutures relay any changes to doctors and patients via computers and smartphones. But these “smart” sutures are less accessible to people in developing countries.

The Iowa City West High School student won a state science fair and became a finalist in a national competition for her invention. She's now eyeing up a patent.

If this wasn't enough to make you question all your life choices, we'll remind you of Gitanjali Rao. The 15 year old was TIME Magazine's 'Kid of the Year' in 2020 for her impressive inventions. We won't be surprised to see Taylor as the 2021 'Kid of the Year'! Seriously, kids these days ...

The Empress Of African Song

Miriam Makeba, aka 'Mama Africa' was one of the first African musicians to receive worldwide recognition. But she had it tough the first few years of her life

Born in Johannesburg in 1932, Makeba faced a lot of difficulties growing up. Her father died when she was young, and Makeba was forced to work to help support her family.

She had a brief and abusive first marriage at the age of 17 and survived breast cancer.

Despite the hardships she faced as a child, Makeba knew that "music was a type of magic" that could elevate her from the poverty that surrounded her

Her vocal talent had been recognized when she was a child, she sang at school and church.

She began her music career in 1950. Makeba performed a mix of jazz, traditional African melodies, and Western popular music with the Skylarks (an all women group), the Cuban Brothers and the Manhattan Brothers.

The key to her international success was a small singing part in the film Come Back Africa. When the film was finished she was invited to attend a screening at the 1959 Venice film festival, where she became an instant celebrity!

She was responsible for popularising many anti-apartheid songs such as "Soweto Blues" which refers to the children's protests and the resulting massacre in the 1976 Soweto uprising.

Many of Makeba's songs were banned within South Africa, leading to her records being distributed underground, and even her apolitical songs being seen as subversive.

To much of the world, Makeba reflected a level of statesmanship that verged on saintliness. "There [was] nobody in Africa who made the world more aware of what was happening in South Africa than Miriam Makeba."

“Dreams and reality are opposites. Action synthesizes them.”