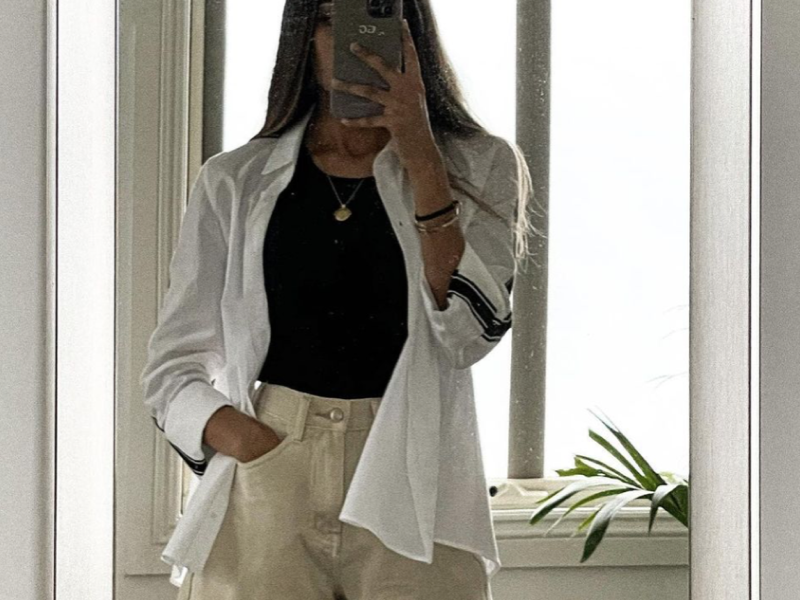 Happy Monday and welcome to this week's edition of Glowreel.

We're talking all about women of colour who are here to shake things up! We're challenging cultural norms, disrupting the food and beauty industries and reaching for the stars.

What a round up

Shorts And A Singlet: The Ultimate Act Of Defiance

Gitika Garg reflects on how a simple outfit choice as a teenager - the classic shorts and singlet combo - has made her realise the power of questioning cultural norms.

You know, things like women being expected to do all the housework.

"The thing that I have come to understand is that gendered bias within my community flies under the radar." Case in point, Garg had to deal with a multitude of unwanted stares for her simple outfit choice when walking down the street while on holiday in India.

Garg has come to realise that the way to overcome gender biases, and to break down barriers, is to create space for normalised discussions on these topics and to challenge expectations.

"It’s about women being heard, valued, appreciated and celebrated. Praising our opinions rather than blocking them out. It is about inclusivity and mutual respect. It’s having the conversations that make people uncomfortable and forcing them to take their blinders off."

Why Clinical Trials Need To Be More Diverse

Through her experience battling lung cancer, she learned that ethnic background can influence the way some pharmaceuticals impact the body. Which kind of makes sense, but also, #mindblown!

Discalimer: the differences in required dosage tend to be minor and generally don't pose any danger. But, knowing more about these differences can help researchers find the most accurate dosages for different patients

Leigh found out that a drug she was taking to manage the side effects of her cancer treatment was double the dose of what she needs as a South-East Asian person.

She's now advocating for people from culturally and linguistically diverse (CALD) backgrounds to have greater access to clinical trials. The hope is that inclusive participation in medical trials and associated research will lead to better health outcomes for the population.

You Need To Read

The Girl with the Louding Voice by Abi Daré.

The Girl with the Louding Voice is an inspiring story of a teenage girl growing up in a rural Nigerian village who longs to get an education so that she can find her “louding voice” and speak up for herself. It is both a heartbreaking and triumphant tale about the power of fighting for your dreams.

Speaking of disrupting the beauty industry, Australian women, Tali Mason and Shaanti Wallbridge, are shaking things up with All Shades Matter Cosmetics

The brand was born after both women struggled to find foundation shades that worked for their skin tone.

Knowing that many people of colour in Australia face the same struggle daily, Mason and Wallbridge decided to launch an everyday foundation that is predominantly for people of colour, catering to a range of skin tones and undertones. They hope to expand their shade range over time too. The aim? To celebrate diversity and all skin tones!

"Our message is to positively change the beauty industry within Australia and the movement of shade variety and diversity."

Reach For The Stars - Mary Golda Ross Would Want You To

Mary Golda Ross was the first Native American aerospace engineer. Her knack for maths at a young age lifted off her trajectory towards the stars

Ross was born in Park Hill, Oklahoma - the small town was known as the "center of Cherokee culture". Her talents were recognised early and she was sent to live with her grandparents in the Cherokee Nation capital of Tahlequah, Oklahoma to attend school.

Ross had to carve out a space for herself in the classroom, but she was ok with that. She "didn’t mind being the only girl in math class [because] math, chemistry and physics were more fun to study than any other subject."

She went on to earn a bachelor's degree in mathematics and a masters degree in astronomy.

Ross taught maths and science at rural Oklahoma schools for nine years. Then WWII hit and it changed the course of her career forever, with Ross becoming a key player in the space race

She moved to California in 1941 to seek out more work opportunities. In 1942, she was hired as a mathematician by the Lockheed Aircraft Corporation. Initially, she worked on the P-38 Lightning, one of the fastest airplanes at the time - it was used a lot during WWII.

Six years later, she was an integral part of the space race. Ross was one of 40 engineers in Lockheed’s "Skunk Works", the company’s top-secret think tank. She was the only woman engineer on the team and the only Native American. She worked on preliminary design concepts for interplanetary space travel.

As her career progressed, Ross worked on the innovative Agena rocket project. She was also one of the authors of the NASA Planetary Flight Handbook and worked on preliminary design concepts for flyby missions to Venus and Mars.

She was featured on the U.S. Mint's 2019 Native American $1 coin. Emily Damstra, the science illustrator who designed the coin said "her achievements deeply impressed me."

Ross passed away in 2008 at the age of 99. She lived long enough to see her work help launch an American Indian astronaut into orbit.

“I shall plant my hands in the garden. And I will grow.”