And I Couldn't Help But Wonder... 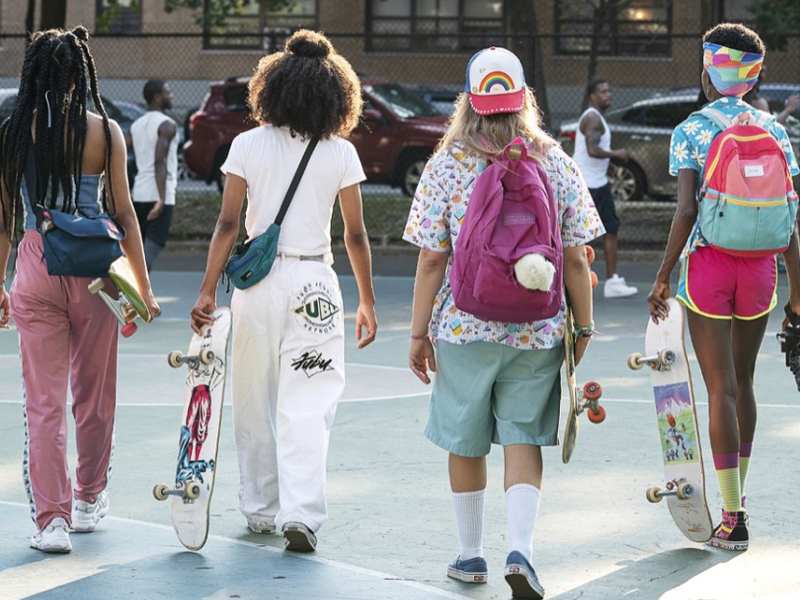 This week's newsletter is your sign to lean in to whatever it is that you love doing, and push past any noise or discouragement.

Because women of colour do some pretty amazing things ... one might say things that are Proper Gnar[ly] (keep reading to appreciate this excellent pun, if I do say so myself!)

Don't forget to take a moment to add some spice (well, Dad's Special Spice Mix) or some Sienna's sauce to your life too! Life's better when it's full of flavour.

Meanwhile, the Sex and the City reboot will be more inclusive, with a diverse mix of main characters. So that’s something for us to look forward to.

P.S. Eid Mubarak (for later this week) to those of you who have observed Ramadan the past month.

Women Of Colour And Sports: A Thread

What do cycling and skateboarding have in common - other than wheels?

You don’t often see women of colour participating in these sports. Mymuna Soleman and Latosha Stone are changing the game in their respective sports.

Soleman is here to improve diversity in cycling. She's a Welsh woman who is of Somali descent, who wears a Burqa and veil. The ambassador for Nextbike UK (a bike rental company) is breaking stereotypes and making cycling normal for people of colour and other marginalised communities. "It is about making it normal by educating people."

Cycling attire is also on Soleman's agenda - she cycles in her Burqa. But growing up, she didn't think this was an option because her Burqa would get caught in the chain. "I couldn’t see myself on a bike and my Islamic clothing was incompatible with cycling. So when NextBike covered the chain with a massive board a few years ago I was like, this is amazing because they used a really simple technique to solve the problem." She hopes to empower women of colour to get on a bicycle with their own set of clothes – from capes, to hijabs, to salwar kameez.

Stone is the first Black woman to start Proper Gnar - a skateboard and lifestyle brand. Fun Fact: Proper Gnar is on Beyonce's Directory of Black Owned Businesses! Growing up, Stone was often the only girl and just one of a few Black people at the Skate Park. People told her that Black girls or Black people don't skate. So Stone is here to shake things up!

Proper Gnar informally sponsors six different female skaters, and the boards were featured on HBO's new series Betty. "Don't let other people discourage you because you'll always have guys that want to say sexist things to you. It's worth it in the end."

Speaking of skateboarding, roller skater Zulfiye Tufa from Melbourne, Australia is doing a 30 day skateboarding challenge. You can follow along on her journey here.

Over In New Zealand, Māori Women And Girls Will Now Have A Starring Role In Sport

All thanks to a new multi-year deal between Women in Sport Aotearoa and Māori Women’s Development Inc.

The new partnership will provide pathways into sport business and journalism through mentorships and scholarships. It will also support young Māori women and girls into positions of influence in play, active recreation and sport.

Meanwhile In Australia, Liz Cambage Is Calling Out Lack Of Racial Diversity In Photo Shoots Of the Australian Olympic Team

She shared two photos. The first (pictured above) featured Aussie Olympians and Paralympians modelling underwear from Jockey. The second photo showed athletes at the launch of the Australian team's official uniforms for the Tokyo Olympics.

“If I’ve said it once I’ve said it a million times. HOW AM I MEANT TO REPRESENT A COUNTRY THAT DOESN'T EVEN REPRESENT ME #whitewashedaustralia,” wrote Cambage.

A spokesperson for the Australian Olympic Committee has since conceded the photo shoot with Jockey “should have better reflected the rich diversity of athletes who represent Australia at the Olympic Games”.

You Need To Add A Little Bit Of Spice...

Priya Sharma's Dad's Special Spice Mix to be precise. Made famous through Sharma's Tik Tok videos, which always start off with "Hi my name is Priya".

The spice mix is an amalgamation of spice blends that saw Sharma through her childhood and she now uses to flavour everything - from fresh fruit through to cooked meals.

Available to purchase on Etsy, each batch of the spice mix is homemade and will be sure to make your meals just that little bit extra.

All Hail The Sauce Boss!

Tyla-Simone Crayton never paid much attention to her mother's 'Wings and Wine Wednesdays' at home ... until one day when there was no sauce in the house.

Crayton, who was eight years old at the time, got creative. She threw together random ingredients and made a sauce that tasted better than the one her mum usually bought!

Sienna Sauce was born - named after Crayton's hometown of Sienna.

The now 17 year old Crayton is founder and CEO of Sienna Sauce which is sold in over 70 retail stores across the US. She plans on growing her brand into a household name, and for the business to be passed down through generations.

Crayton's advice for you? “Whatever you do ... make sure that you do it to the fullest. No matter what you do, just put your whole heart into it.”

Edwina Justus, aka "Curlie" battled racism and sexism and hustled her way from yard hostler to becoming the first black woman locomotive engineer for the Union Pacific Railroad

She graduated high school in 1960 and started working as a wireman (wirewoman?) at Western Electric. She applied for a position at Union Pacific, but the company denied her application due to her race and gender. Justus eventually enrolled at the University of Nebraska in 1969, hoping to become a social worker.

She left the University of Nebraska and began working at Union Pacific as a Traction Motor Clerk in 1973. Justus was one of only five black women at the company.

While in this role she heard of a new position opening up for a train engineer and applied.

She began her locomotive engineering job as a yard hostler, moving locomotives and their cars around in the train yard.

She retired in 1998 and moved back to Omaha with her husband, Arthur, who she met while working at Union Pacific (cute!)

She was featured in an exhibit in the Union Pacific Railroad Museum in 2016 - where her life experiences and achievements were highlighted.

Justus also just released her autobiography, Union Pacific Engineer, sharing how she overcame sexism and racism on the job through tenacity and kindness.

"I'd rather regret the risks that didn't work out than the chances I didn't take at all."