An Astronaut, A Child Rights Advocate And ... The Marvel Universe? 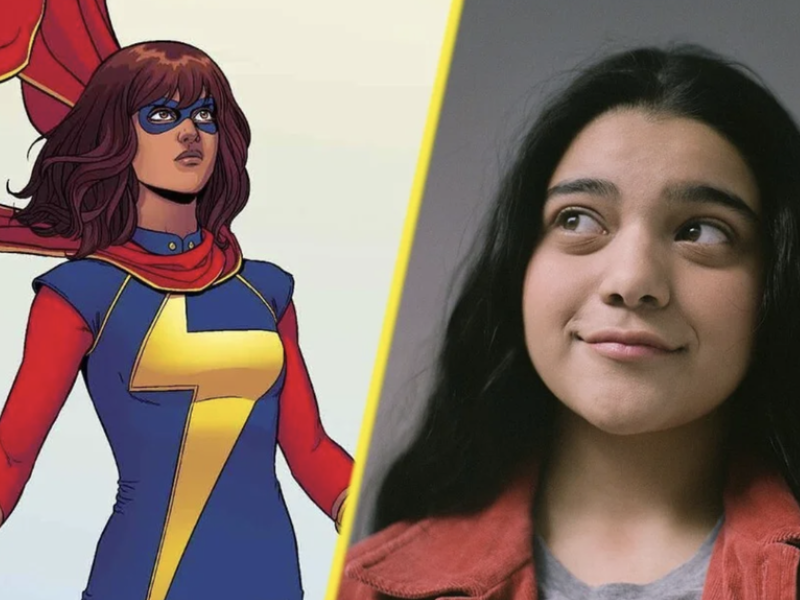 Welcome to your weekly dose of Glowreel! This week, I've broken the news round up into inspiration, motivation and representation - so you know you're going to walk away feeling ready to GLOW ✨

Also, Kamala Harris made political history in the US (again!) as the first (acting) woman President ... but not quite in the way you would think. The Cut wrote a pretty entertaining piece on it - definitely check that out in the Bites section.

Lana Patel is this week's community feature. Per usual, I've popped some interview snippets in the Community Spotlight section and the full interview is up on the Glowreel website. Please check it out - Lana has openly shared her incredible story with Glowreel. Trust me, you're in for a wave of emotions and some wise advice with this interview.

And on that note, let's get glowing!

P.S. In this week's feel good moment, Amanda Gorman presented Simone Biles with the Original Award at the 2021 InStyle Awards and commemorated the moment with an original poem called The Greatest 👏🏾

An Astronaut, A Child Rights Advocate And ... The Marvel Universe?

Inspiration: Jessica Watkins will be the first Black woman to live and work on the International Space Station. From April next year, Watkins will be heading off on her first mission in space. She'll be spending six months on the International Space Station as a mission specialist. Watkins hopes to inspire more kids of colour to want to go to space. "I do hope that all young girls, especially young girls of colour that are interested in STEM and interested in exploring space, feel empowered to do so."

Motivation: Kriti Bharti is fighting the good fight against child marriage.She secured India's very first child marriage annulment in 2012 and has assisted in 42 other cases since. She wants to support the girls to speak up for themselves, too. "I tell all the girls that I will only take their case if they promise to continue their education ... I want them to get to a place where they are able to speak up for themselves and protest if they are ever pressured to get married again against their will."

Representation: The Marvel Cinematic Universe (MCU) continues to make waves for representation. You already know (or do you?) about Chloé Zhao's fresh take on Eternals, including Marvel's first deaf superhero. Next up, the Marvel series Hit Monkey is hitting up TV screens with a predominantly Asian-American cast. In 2022, Ms. Marvel will introduce Kamala Khan (played by Iman Vellani) to the MCU too.

Speaking of representation on screens, see also: The official trailer for Turning Red has been released - it's Pixar’s first Asian-led feature film and is due for release on 11 March 2022. Mindy Kaling's The Sex Lives of College Girls is out now, and you're in for some relatable and entertaining content.

A reminder that you could win some free tickets:

Three Fat Virgins Unassembled is about women in impossible situations, judged by equally impossible standards. With a team of 13 Asian female-identifying theatre-makers, Slanted Theatre's latest play is on 24 November - 4 December.

If you're in Sydney, Australia (or know someone who is), you can win two tickets to a preview of Three Fat Virgins Unassembled on Wednesday 24 November, 7:30pm.

To enter, email your name, mobile number, and email address to threefatvirginsunassembled@gmail.com with the subject Glowreel x 3FVU.

You need to try: cooking up a delicious Korean meal thanks to Maangchi.

Maangchi taught Mel how to cook Korean food - Mel is Glowreel's research and strategy queen + a food and fitness junkie!

On Being Your True Self: In Conversation With Lana Patel

Lana Patel is a force to be reckoned with, and one of the kindest people you will ever meet! She’s a proud trans woman who uses her platform and voice to advocate for trans women and women of colour.

Lana is also a model and makeup artist for MAC (pro tip: Lana loves the MAC studio fix line, and beyond MAC, is a big fan of Live Tinted!).

We caught up with Lana to hear more about how her heritage has influenced the woman she is today, her experience transitioning to her identity and her excellent tip for loving the skin you’re in.

We've shared some interview snippets below. You can catch the full interview on our website.

I’m Lana Patel. My pronouns are she/hers. I’m an Afro-Indo Caribbean trans woman and I was born and raised in Queens, New York.

Go-to coffee order: I have a few things! If I go to Starbucks I’ll do the chai tea - not the chat tea latte though! I do the chai tea bag in a venti size, with soy milk, no water and ten raw sugars (I want it Gujarati style!). I don’t really drink coffee - if I’m ordering a coffee it’s because I need the caffeine. So I’ll get a cold brew nitro in Grande with vanilla sweet cream - I’ll put in seven pumps to make it sweet!

Has your heritage influenced your passions and interests? If so, how?

Who I am is a combination of the music that I used to grow up listening to, the food that I ate, the stories that I was told and dance - I come from such rich cultures and dance flows through my veins.

What was your experience transitioning to your identity? Was there a particular moment where you knew you were your true self?

I always knew who I was - as far as the early age of three I remember feeling an inconsistency between how I felt and how I was treated. So I felt like a girl, I felt like the other girls, but I was being responded to as male.

When I was 12 I came to the realization that this is who I am. I felt compelled to come out to my teacher in an essay. Initially I identified as gay - I knew that I liked guys. I also didn’t have to deal with the transition part - I knew that was a bigger task. I knew I needed parental consent and I knew my parents wouldn’t consent. Especially because, culturally in the Caribbean, misogyny and homophobia are rampant. We can’t even get into transphobia - trans identity wasn’t even something that was thought of. So the idea of transitioning was deadly.

At 17 I decided to transition. I got to a place where I was like, it needs to happen and I'm ready. I started a social transition first and started growing my hair out. And then I started taking black market hormones, and that kind of fast tracked my transition.

[Lana shared her full story with us, and we highly recommend you read the full interview here].

You're a model, dancer, singer, makeup artist and a host for Girls Like Us. What's been the proudest or most special moment of your career to date?

My proudest moment was when I was featured in Vogue India - that was a dream of mine!

I also got to do a Pantene commercial and that was incredible. Seeing an Afro-Indo Caribbean person in a sari celebrating Diwali on a commercial - just epic!

Recently I walked in LA Indian Fashion Week and I was the first trans woman to walk in the show - which was a dream of mine.

What's your advice for loving the skin you're in?

There’s a quote by Rupi Kaur (who I love!) where she says “It is a blessing to be the colour of earth. Do you know how often flowers confuse me for home?” I think that’s so beautiful.

When it comes to loving the skin you’re in, it’s about figuring out what brings you joy and knowing that that is the thing that will help you in times of distress or uncertainty.

Figuring that out for yourself will help you to realign and remind yourself how beautiful and powerful you are. When I have that moment where my roots need watering, it’s about going outside and getting fresh air and sunshine.

The full interview with Lana is available here. In addition to the snippets above, Lana shares what motivates her to to advocate for and uplift women, and the women who inspire her.

The Trưng sisters: The Original GirlBosses 💅

This was the first rebellion since the Chinese takeover 247 years prior – with a militia consisting mostly of women fighters. It has been said in the Book of Later Han that Trưng Trắc launched the rebellion to avenge the killing of her husband. After the campaign and the subsequent support of 65 towns and settlements, Trưng Trắc proclaimed herself Queen and her sister Trưng Nhịthe queen's regent. The pair ruled a portion of independent Vietnam for two years, until Chinese General Ma Yuan suppressed the revolt and reclaimed the land in 43 AD.

Though their reign may have been short-lived, the sister duo have been immortalised in Vietnamese temples, plays, poems and folklore. To this day, they are regarded as national heroes, are emblems of freedom and independence and are annually celebrated on Hai Ba Trung Day.

"Don't wait around for other people to be happy for you. Any happiness you get you've got to make yourself."