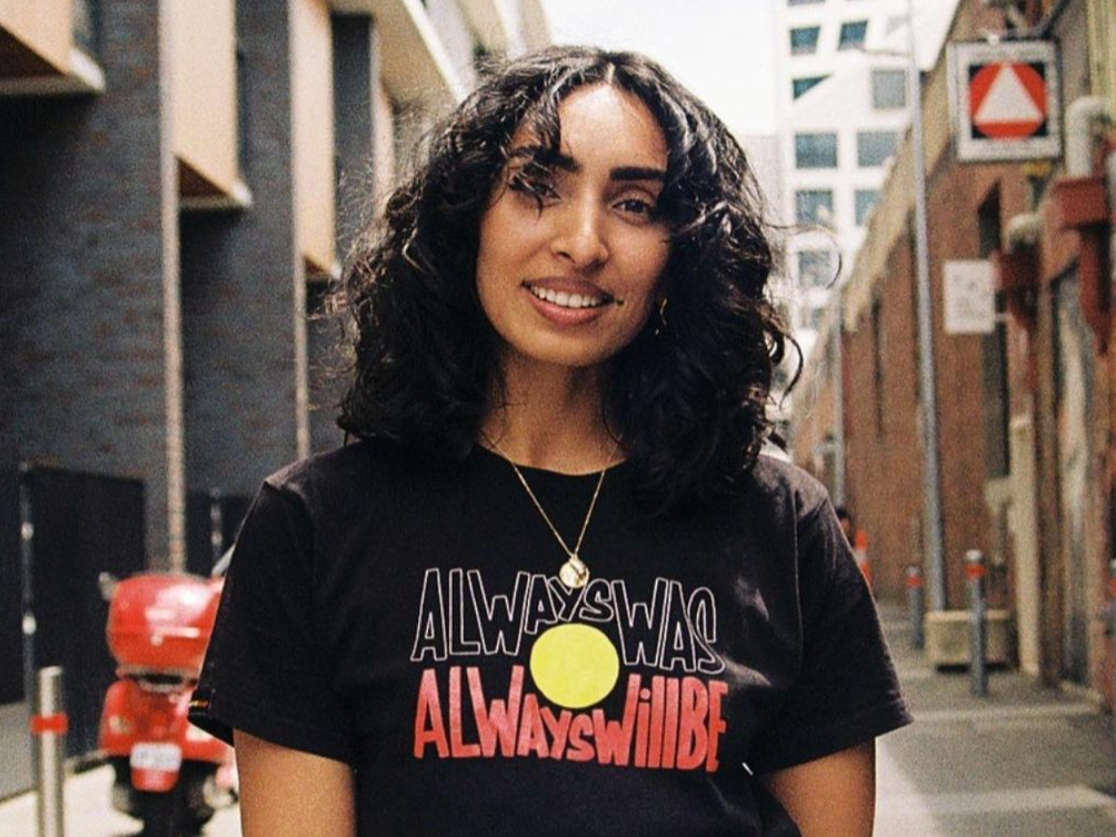 Every week we put the spotlight on women of colour all around the world.

This week is no different, but you may notice a lot of content is focussed on First Nations women in Australia.

Because this week marks the 26th of January, aka Australia Day or Invasion Day - a day of mourning and remembrance for First Nations people in Australia, and for many non-indigenous Australians. (ICYMI: Glowreel HQ is in Australia).

To our First Nations friends and audience, we stand with you and we will continue to highlight the incredible work of women in the Aboriginal community.

P.S. Representation matters. Which is why we are here: to share as many stories as we can about women of colour from all over the world, and amplify as many voices as possible.

Yatu Widders-Hunt, a Dunghutti and Anaiwan person and founder of Australian Indigenous Fashion, puts the spotlight on Indigenous brands with strong messages.

Recognising that fashion is a platform for sharing important social messages, including a powerful form of political protest, Widders-Hunt notes that now more than ever, First Nations fashion is playing a critical role in sharing and celebrating Indigenous communities and culture.

Some of our favourite Indigenous women founded fashion brands included in the roundup (we think you'll love them too!) are:

Aboriginal Women In The Running For 2021 Australian Of The Year

Tanya Hosch and Professor Helen Milroy are two of the eight finalists for the 2021 Australian of the Year award, and with good reason. The annual awards recognise the impact and achievement of Australians across a range of sectors.

Hosch is credited with leading "visionary" change inside the AFL - one of Australia's largest sporting bodies. She is the first Indigenous person, and second woman, on the AFL's executive leadership team as the executive general manager for inclusion and social policy.

"The more aware you become of the inequalities people live with the more you want to be a part of changing those situations and systems that enable that ... to be a voice for some of those things, and to be invited to sit at the table to advise on some of those things is a huge motivator," says Hosch.

She's also used her platform to call for Australia Day to be moved away from January 26 so it can be a public holiday celebrated by everyone.

Having been raised in a family of healers, she balances her work in medicine with paying respect to the traditional healers who came before her over thousands of years. She's also supported the Aboriginal and medical workforce in applying Indigenous knowledge and cultural models of care.

Milroy is regarded as a pioneer in research, education and training in Aboriginal and child mental health, and recovery from grief and trauma.

How To Boost Diversity - As Told By Women Of Colour

Women of colour leaders shared their thought on how to make the world a more diverse and inclusive place during the Wold Economic Forum's Pioneers of Change Summit.

Revathi Advaithi, CEO of manufacturing company Flex, calls out sponsorship as a way to help level the playing field in 2021.

“All companies need to find a way to sponsor women, sponsor minorities, sponsor Black people ... we need people who, at the point they’re going to make a decision, stand up for that woman, that Black person or that minority."

Lindiwe Matlali, Founder and CEO of Africa Teen Geeks and a Schwab Foundation Social Entrepreneur, considers more and better visibility of role models is crucial. Representation matters, after all!

Fallon Gregory is a proud Kija and Bardi Jawi woman who wears many hats, including being a model, mother and an Indigenous activist.

With over 20,000 followers on Instagram, Gregory uses her platform to speak out about social injustices, particularly for the Aboriginal community, amplify Aboriginal voices and to encourage Aboriginal Australians to use social media as a tool to bring awareness and change.

Speaking about her platform, Gregory notes "... it means I have the luxury to speak and be heard, and therefore amplifying voices and issues for others and myself, and allowing others to become educated or aware of them on a larger scale."


Including Every Child In The Tech Revolution

Lindiwe Matlali is the Founder and CEO of Africa Teen Geeks, a social enterprise that teaches children and unemployed youth how to code, exposes them to computer science, and inspires a future generation of technology entrepreneurs and innovators. Matlali is driven by the belief that no child should be left behind by the tech revolution.

Established in 2014, Africa Teen Geeks has grown to become the largest computer science non-profit organisation in Africa. One of the organisation's biggest highlights is the first computer science week it hosted. 12,500 children from disadvantaged communities were invited to computer science classes at various University of South Africa computer labs. 98 per cent of those kids had never touched a computer before; by the end of the day they had written their first code!

Like all Aboriginal people in the 50s and 60s, Goolagong faced widespread discrimination growing up. But one day, local player Bill Kurtzman saw a young brown girl peaking through the fence at the local courts. So, he invited her to play.

A small but not insignificant act of kindness. And, it provided the opportunity that Goolagong needed to change her life and tennis history forever.

The Wiradjuri Wonder Woman later became the first mother to win Wimbledon in 66 years when she won it all again in 1980. Oh, and she became the only Wimbledon champion in history to defeat four top ten players on her way to the title.

All up, this Australian icon won 14 Grand Slam tournament titles (seven in singles) and ended with 82 singles titles across her professional career.

Perhaps even more important than her sporting accolades are her contributions to improve the lives of all indigenous Australians. Since 1997 has held the position of Sports Ambassador to Aboriginal and Torres Strait Islander Communities.

And she now leads the Evonne Goolagong Foundation which “uses tennis as a vehicle to attract Indigenous girls & boys in order to promote and help provide high quality education and better health through diet and exercise.”

Let's name the arena after her

“When you have a dream you have to work hard to achieve that dream. Your dreams when you are young can be the force that keeps you going.”

‍Your friends and family could be featured too. We're always looking for new stories to tell. Don't be shy, get in touch. If you know a story, a person, or a business that you would love to see in Glowreel, please submit your ideas to hello@glowreel.co or DM us on our socials :)